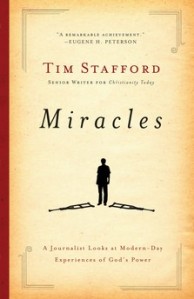 Shortly after I became a Christian, I was baptized in our small Reformed Presbyterian church and invited to join as a member. I remember the membership form I was asked to sign. It covered basic doctrinal positions of the church, and one stood out to me: it said that I believed that signs and wonders had ceased after the time of the apostles. I spoke to my dad about this, in part because I was uncertain I could agree with this statement. He told me he had had a similar reaction when he joined the church. He said he crossed that one out! I did the same. Although I was not raised in a church tradition that exposed me to charismatic gifts, I was not certain I could say that they did not exist, and it seemed odd to support a doctrinal position on what the Holy Spirit might choose to do in a person’s life.

There are likely varying degrees of familiarity with this topic among those who read this blog. It is interesting to be a part of a church that more overtly teaches and affirms the existence of miracles. (Of course, the very fact that a person is a Christian is an affirmation of the miraculous, so it is interesting to even have this as a separate point of discussion when you think about it…) In any case, in that context people would be invited to receive prayer for healing at the altar rail during or after services, and there would be an expectation that miracles would occur. In church settings like I am describing, I would say several people would admit to witnessing in their own lives (or in the lives of others they know personally) a miracle. But these experiences have not been part of my church culture, and it has been a process for me to recognize that church “culture” can quickly shape doctrinal positions, fuel skepticism (or faith and belief), and the way this is shaped can lead to very different conclusions about what is happening in a given service.

The title of this post is from Chapter 5 of Tim Stafford’s new book, Miracles: A Journalist Looks at Modern-Day Experiences of God’s Power. The semi-believing doubter is the skeptic who “doesn’t believe science excludes God,” and may believe in the miraculous in theory, “but in a practical sense, he or she lives as though miracles don’t exist” (p. 69). This is the state of many Christians in the U.S. today, including the author from time to time. Yet this makes Tim Stafford an ideal choice to write this book. He is a trusted journalist who has been with Christianity Today for years. He asks many of the questions most of us who are skeptical would ask, and he is honest about the scrutiny we would give to claims of the miraculous.

Stafford reviews accounts of the miraculous in Scripture, starting with the Old Testament and then through the New Testament. He reminds the reader that for the vast majority of that history, there were no or few records of miraculous events. The same appears to be true in Christian history since the time of the apostles. Yet there is also evidence that miracles did occur–in the Old Testament, in the New Testament, and at times throughout Christian history. Of course, having recently celebrated Easter, Christians base their whole faith in the resurrection of Jesus, so once that is taken as true (and there is significant evidence to support that claim), then other miracles certainly seem possible, if uncommon. Stafford then brings the reader up to the contemporary Pentecostal movement that began with the Azusa Street Revival in 1906 and continues today throughout the world.

I appreciated Stafford’s comment on scientists who dismiss the miraculous out of hand because they believe if someone is rational, that person cannot possibly consider the miraculous:

Oddly enough, it’s not a scientific point of view. Science would seek to investigate. This position maintains that no investigation is necessary… This is a philosophical position–just the sort of philosophical a priori assumption that scientists say they abhor. (p. 166)

I have found a similar bias in psychology. Training in the behavioral sciences can quickly become a worldview, a lens through which all of “reality” is reduced to what we can measure as psychologists. When it becomes a worldview, people who adhere to it can find explanations for most everything, even those things beyond its reach.

Stafford offers several helpful conclusions for Christians to consider–twenty, to be exact. He concludes that miracles do happen, that they are rare, and that they do not point to themselves or the person who does them but to the Kingdom of God. Healing is more common, and only rarely does healing surprise us such that we think of it as a miracle. In some circles, people will “pass along miracle stories uncritically, so many of them don’t hold up to scrutiny. But that doesn’t mean that none are true” (p. 200). That last one is a good reminder for those who are more skeptical.

This was a quick read. It is well-written and thoughtful. Again, Stafford is not pushing the miraculous as a card-carrying Pentecostal; nor is he a cessationist. There is a real balance in how he approaches the topic, and I think many Christians today will find this book to be a great source of encouragement as they consider how God may be at work in the world and in their own lives.

It was helpful to me personally to read a book from an author who has a similar cultural background as my own (and accompanying doubts and questions). I’ve read many book from authors who are already “there” as charismatics, and those books use language and constructs that I find difficult to use in my own everyday way of thinking about faith. But I want to take seriously the possibility of the miraculous, and Stafford finds a place for miracles in a culture polarized between skeptics on the one hand and charlatans on the other.

One thought on “The Semi-Believing Doubter”